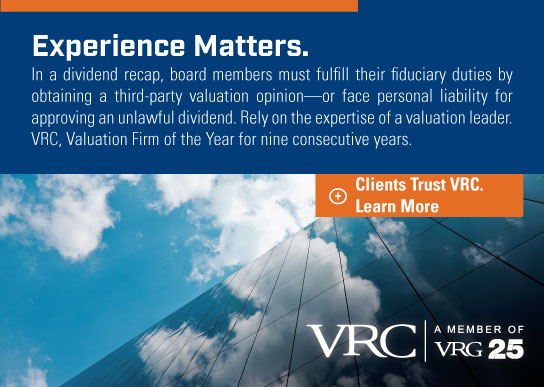 Bryan Browning: Well, John, generally, a solvency opinion is a document that states that, after a transaction is consummated, the company is solvent. And this usually means that new debt is taken on as part of the transaction.

John Bintz: And who would request them?

John Bintz: And what are the requirements?

Bryan Browning: Requirements are three-fold. There are three tests of solvency. The first is a balance sheet test and, in this test, the fair value of the assets are compared to the liabilities that are taken on as part of the transaction. And if those assets exceed the liabilities, it meets this test of solvency.

The second test is a cash flow test. In this test, the management’s forecasted cash flows, including the new debt and interest payments, are analyzed. If the cash flows support the new operating structure, then it meets this test of solvency.

And then, third is a capital surplus test. And, in this test, the forecasted cash flows of management are stressed to see if, in a downside scenario, we want to see how much cushion there is if the company misses its forecasts.

John Bintz: So in 2010, there was approximately $54 billion of dividend recapitalizations. In 2011 there was $57 billion. If you’re a private equity fund, why would a solvency opinion be so critical?

Bryan Browning: Well, John, it’s absolutely critical because no party to the transaction wants to see a fraudulent conveyance or a fraudulent transfer. So, if the company is found to be solvent at the time of a pending transaction, then boards of directors, private equity firms, and lenders can take satisfaction that a qualified independent firm provided or rendered an opinion of solvency.

John Bintz: Bryan, thank you very much for your insight and your remarks on this topic.

Join Chad Rucker, esteemed faculty member of the PLI, as he chairs this session discussing how financial statements provide key information on the financial performance of companies and are the language of business.

Board members can demonstrate that they have fulfilled their fiduciary duties in dividend recapitalization transactions by obtaining opinions from third-party solvency opinion experts.