Between a robust fundraising environment, looser regulatory restrictions on leverage and banks competing to lend to credit investors, business development companies (BDCs) and other private credit vehicles are awash in fresh capital. In a discussion moderated by VRC Senior Managing Director John Czapla at the second annual Private Debt Summit, panelists from the buy-side and fund lending arenas agreed that market participants are handling the liquidity well so far, but panelists also warned about the potential for excesses and urged a continued emphasis on the best underwriting and operational practices.

Private credit funds raised $107 billion in 2017, according to the 2018 Preqin Global Private Debt Report, bringing the total size of the industry to $874 billion in equity capital, split $638 billion in invested assets and $236 billion in dry powder. The average fund is now more than $1 billion. There are two trends driving capital into private credit, panelists said. First, is the continued rotation into alternative asset classes by yield-starved investors. Secondly, within the growing alternative asset universe, panelists said credit, especially senior credit that targets a net return of roughly 10 percent, stands out from its peers in what many allocators consider a late stage in the economic cycle. Mezzanine and private equity may target slightly higher ROIs of 12 to 15 percent, but there is a sense among investors that being in the riskier part of the capital structure (mezzanine) so late in a bull market is not desirable. As one panelist put it, “a lot of things have to go right in PE or mezz to achieve that return.”

Retail investors are proving to be an essential source of capital for credit funds, especially registered BDCs. Institutions continue to invest via separately managed accounts and non-public BDCs, but with regards to private BDCs institutional appetite is limited: “For every LP I meet with that’s interested in the institutional BDC structures there’s another that doesn’t get it or is not interested or is concerned about liquidity,” said one participant.

Regarding geography, capital is coming from all corners of the world, including Japan, which had been slow to embrace direct lending. The one notable exception? The Middle East, where interest has been tepid. 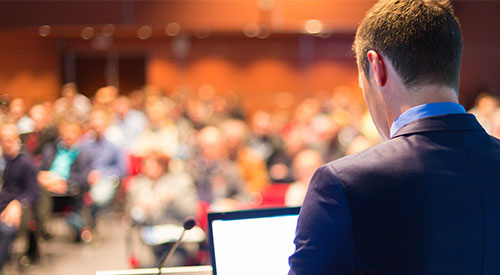 After lobbying for years for an increase in permissible leverage, BDCs finally got what they were asking for at the end of the first quarter when Congress passed a spending bill that included a provision to allow funds to employ leverage up to two times the total debt to equity (2:1). Previously, leverage for BDCs was capped at 1:1 total debt to equity. The panel agreed, however, that most private credit managers are still working through the implications. “The core argument among those who advocated for 2:1 was that it would give managers access to a more diverse pool of assets,” said one panelist. “If they see an opportunity with a less risky asset, the idea was that they could go in and take the leverage up to produce a more attractive return. But in practice, the near-term impact has been de minimis” so far. The panel pointed to some reasons why after years of pushing for the measure the industry has been slow to take advantage of it:

While market participants are moving judiciously, members of the panel still expressed concern that new regulations could lead to some problems in time, as managers venture into less familiar parts of the capital structure armed with leverage. “At the end of the day, it’s got to work within your platform,” remarked one participant. “Junior debt or second-lien players may lack domain expertise to transition to leveraged senior loans and boards, and CFOs need to think about whether first liens are a core competency.”

Another panelist had a more blunt, more macro view on the introduction of greater leverage into the private credit markets: “It may throw a little bit of gas on the fire at a time when, in my opinion, no more gas is required.” In finality, the panel participants believe that BDCs may employ a bifurcated strategy that will involve increasing leverage closer to the new cap for lower risk, more liquid first lien loans while sticking to the older leverage limits for higher risk, less liquid first lien loans, and junior capital (2nd lien loans and mezzanine debt) securities.

The business of lending to credit investors—for both single asset purchases and subscription finance—has continued to develop in recent years, as commercial and investment banks remain interested in earning premia for financing less liquid assets. While it is the case that the inflows of investor capital and a number of new entrants into the credit fund space potentially increases the likelihood of lending mistakes, one participant involved in the space suggested that risk is offset, to an extent, by the growth of a broader pool of potential purchasers of the collateral. “When we first got into this 20 years ago there was always the question, ‘If we end up owning this stuff, who would we sell to?’ But now there are lots of secondary transactions and whole portfolios trade.”

"New regulations could lead to some problems in time, as managers venture into parts of the capital structure they may be less familiar with."

One panelist also noted that the new leverage rule is likely to have the salutary effect of making leverage that was already present in the form of senior secured loan programs (SSLPs), where BDCs raised their effective leverage off-balance-sheet by entering into joint ventures with financial partners, more transparent. Some in the room even speculated that the new leverage rules could ultimately spell the end of the SSLP phenomenon. Although, leverage in these vehicles is often more than 2:1, which will still be attractive for certain managers and their investors in the senior securities of those funds.

The Opportunity Set in Private Credit

With all the capital flowing into the private credit space, VRC’s Czapla asked, whether there are still compelling investment opportunities?

“I would say the market is crowded, not saturated,” responded one of the panelists. “We operate in a competitive market and always have, but there is still adequate deal flow. If you look at the stats on the deployment of funds, they [investors] are finding places to deploy their money.” Other participants agreed, noting that a healthy economy is creating a tailwind for growth-minded borrowers, even with LIBOR rates climbing higher. On the flip side, rising LIBOR makes privately-originated floating rate loan products more attractive to investors versus other forms of mostly public fixed-rate credit instruments.

Still, there was concern that “crowded” could become “saturated” soon, especially in the first-lien space, which is most likely to be impacted by the new leverage rule. One participant was wary that, with more capital coming into the market, some private loans that were historically priced at LIBOR + 650 basis points or LIBOR + 750 basis points—“and only worked at that level”—could begin pricing closer to comparable syndicated bank loans. Similarly, there was a concern that so-called unitranche loans risk being priced closer to stretch senior deals.

With all the money flowing into direct lending, participants on the panel agreed that investors should avoid allocating to managers whose only discernable edge is showing up to an auction with plenty of cash and a low cost of capital. Whether it is sourcing prowess, experience in working through problems or a partnership or affiliation with a private equity firm that can act as a backstop when deals turn sour, panelists said LPs should look for firms that add value and bring something to the table beside a willingness to lend at a low price.

"Investors should avoid allocating to managers whose only discernible edge is showing up to an auction with plenty of cash and a low cost of capital."

VRC’s Czapla noted, and the panelists concurred, that with so much capital flowing into private direct lending, deals in the current market often feature borrower-friendly terms that need to be thoroughly analyzed and continually monitored. Panelists were especially focused on covenant-lite loans, the lack of call protection in many current deals, and the liberties and contingencies many borrowers are taking with the definition of EBITDA. EBITDA adjustments are now present in nearly 30 percent of sponsored transactions, and nearly four out of every five middle market syndicated loans include watered-down covenants. These deal features require extra care during the underwriting process and stepped up vigilance and monitoring after investing.

It is a pivotal time for private credit market participants—the global economy continues expanding, regulations are easing, investors are allocating record levels of capital, and banks are expanding their lending. Just as important, while they perhaps require more discernment, there are still attractive deals to be had, especially for fund managers that can add value beyond the capital they can offer.

At the same time, there was a sense that with all the exuberance, some less experienced players charging headlong into the market will inevitably get out over their skis. “Some firms will get it right,” predicted one panelist. “Others won’t.”